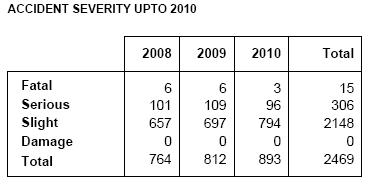 The most recent Road Accident and Casualty Figures, 2008-2010

How we got the latest statistics: One of our active WLS supporters, Paul Dinsdale, has done a heroic job  during this past summer  (2011) using the Freedom of Information Act to extract detailed statistics from Wandsworth relating to accidents and injuries on our roads. The figures cover the three most recent years – 2008, 2009 and 2010. Congratulations to Paul for persevering in extracting them, and thanks from all of us for taking this initiative.

See the full figures for yourself: . Do take a look at them.

The Pattern of Injuries on Wandsworth roads that emerges:   Here are some of the important things that emerge from the figures.

If ever there was a case for lowering the speed limit from 30mph to 20mph, and considering doing so not just on local residential streets managed by Wandsworth Council,  but also on selected roads controlled by Transport for London (TfL), here it is loud and clear in the statistics of human suffering.

Overwhelmingly, this is a price that people living in Wandsworth are paying at the hands of motorists, some of whom are from our borough,  and some simply driving through our part of London.

It is completely unacceptable that we in the community should pay this price for a mode of transport in which, at the time of us being injured, and in a small number of cases being killed, we were not even travelling in.