Will a 20mph speed limit be enforced?

Many people who support 20mph in principle are deeply sceptical whether there is much point in having it because they feel the new speed limit is not going to be effectively enforced. Quite right.  Introducing a legal 20mph speed limit is only the first step.  But up and down the country, introducing 20mph is being followed by a series of measures to shift public attitudes generally, and driver behaviour in particular.  Here are some of the things being done:

A 20mph speed limit is only a first step, yes. But we can’t move towards getting it respected by drivers in practice until that first step of introducing it is taken.

What roads will be affected?

Residential roads in all parts of our Borough. 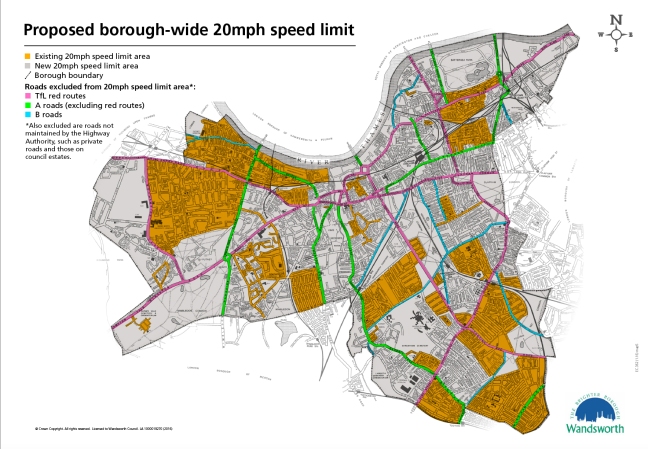 Excluded are the 38 A and B ‘Main Roads’ managed by Wandsworth Borough. But the Council’s consultation lets us express our view whether some or all of these roads should also have a 20mph speed limit.

Also excluded from the consultation are the small number of big roads, or ‘red routes’, managed by Transport for London.

What is the Closing Date for Wandsworth Council’s Consultation?

The Consultation opened on the Council’s website on 8 February 2016. No closing date was given. But it is likely the Consultation will end fairly soon after the London Mayoral and Assembly elections on 5 May.

What is the cost of changing the speed limit to 20mph?

The Council estimates the cost of implementing 20mph on all residential roads across the whole borough at £820,000. Transport for London (TfL) has confirmed to the Council that, if there is a majority vote in favour of the 20mph speed limit, it will make the whole sum available for the work to proceed in this financial year 2016-17.

Not we Council Tax payers. Not Wandsworth Council. Transport for London (TfL) has committed itself to funding 20mph in those boroughs where residents want it.

Nearly half Wandsworth households do not own a car.

And those who do have a car don’t drive all or even most of their trips. They instead often use public transport or walk or cycle short trips.

Car owners, whether driving or not, will benefit from the drop in the number of collisions that 20mph brings. What’s more, as safer roads encourage more people to walk or cycle short trips, congestion will be reduced for those who still need to use their vehicles for work or other purposes.

How much are cars likely to slow down by?

The Council is only proposing 20mph on residential roads. The typical car trip involves only a few hundred yards on such roads before getting to bigger roads that will still probably be 30mph. So only a few seconds will be added to car journeys.

In London, there are two main factors making car journeys slow – queues at junctions and the density of traffic. Speed limits are largely irrelevant to journey times.

Will there be fewer collisions if 20mph is implemented?

Yes. On urban roads with low traffic speeds, for every 1mph reduction in average speeds, the number of collisions falls by about 6 per cent.

Will any parking be lost?

Not as a result of introducing a 20mph speed limit.

Will congestion on our roads increase as a result of a 20mph speed limit?

No. Probably the reverse. Slower speeds means fewer collisions. Collisions cause congestion; so fewer collisions will mean fewer delays. What is more, as some car drivers start cycling or walking short trips, there will be fewer cars on the roads and less congestion.

No. A 20mph speed limit involves signage only, without the speed humps and other ‘traffic calming’ measures that have become the bane of drivers and cyclists in our Borough.

Will there be more speed cameras?

No. Funding for installing speed cameras currently comes from the Mayor of London. No speed cameras will be installed as part of this proposal for 20mph on our residential roads.

Will the Council make money out of speeding fines?

Enforcing 20mph will not raise money for the Council. Revenue from fines goes to the Government. Neither Wandsworth Council nor the Police will receive any income from a 20mph speed limit.

Will 20mph make any positive difference?

Evidence from the many cities and areas in Britain where 20mph has become the new norm is that it makes a huge difference – reducing the number of collisions, reducing the severity of injuries, making local streets quieter, and improving people’s health by making it safer and pleasanter to walk or cycle short trips.

Don’t we already have 20mph on roads near schools?

Yes. But children live in streets spread across the whole catchment area of their school. If we want to make children’s journeys to school safer, and encourage them to walk and cycle more, it is necessary to make all residential streets 20mph.

No. Currently, Wandsworth’s roads are a patchwork of different speed limits (20mph, 30mph, and 40mph). This requires a lot of signage. If all our residential roads were 20mph, this would mean, if anything, fewer speed limit signs.

Are other boroughs in Inner London going 20mph?

Six London boroughs, including the City of London, now have 20mph on all the roads they manage. Three more are rolling it out this year (2016). Several others are in the process of consultation, decision-making or phased roll-out. The only remaining Inner London exceptions will be Westminster, and Kensington and Chelsea.

There are several main sources of air pollution in London – including diesel vehicles, Heathrow, and emissions from buildings. But as Cllr Jonathan Cook, Deputy Leader of Wandsworth Council, said in launching this 20mph borough-wide consultation, “A recent study by Imperial College found that diesel vehicles with engines of between 1.4l and 2.0l produce fewer harmful emissions at 20mph than at 30mph while smaller petrol and diesel engine vehicles both generate fewer particulates when driven at this lower speed.”

Isn’t the real road safety problem located on those more major roads that are not mainly residential?

Around half of all collisions and injuries in London occur on the tiny minority (about 7%) of major roads controlled by Transport for London. There are also road safety problems on some Wandsworth Council-managed ‘mixed use’ roads – in particular, busy shopping streets where there are also lots of people living. Wandsworth Living Streets argues that such streets also need to be examined to see whether there is a road safety case for 20mph and whether local shopkeepers would benefit by transforming such streets into more attractive places where people will want to come and shop or use other local facilities.

These FAQs were prepared by Wandsworth Living Streets, February 2016.